Our Thoughts and Opinions on Various Topics!

What are Virtual Servers

Traditional servers tend to take up at least one physical server each. While this makes maintenance simple and operations streamlined, costs become higher because the processing power of the server is only utilized towards one application or platform. And physical servers aren’t really “cheap” to buy and maintain either as they tend to be expensive devices that eat up a lot of electricity. But with physical servers becoming more efficient in terms of storage and processing power, some data centers have decided to insert two or more applications in one server via a hypervisor that emulates the capabilities of multiple physical servers in one. This is how virtual servers came into existence.

The functions of virtual servers are various depending on their application. Some of the basic functions include web hosting, as well as data storage and app hosting. But since hypervisors emulate physical hardware as well, each virtual server also comes with a virtual CPU, virtual memory, virtual disks, a virtual networking interface, and an operating system along with the existing hardware of physical servers. Computer scientists categorized these functions under the term “Infrastructure as a Service” (IaaS). Though virtual servers are a form of IaaS, they are often mistaken for cloud servers which have a similar function but with different methods of operation.

Due to their digital nature, virtual servers are usually the priority choice for testing new software, applications, and operating systems. This is because of the highly customizable nature of virtual servers, and their openness to customization. Computer scientists and tech engineers may use virtual servers to implement new programs, and even test viruses, that may damage existing machine hardware.

Virtual servers can also be customized heavily, similar to any other dedicated server. Users have direct access to the operating system and server software. This means that users not only can customize their apps or website hosted in a virtual server but also how the server operates in terms of processing and power consumption. Some limits can be imposed however intentionally by data centers with regards to safety and security. Since virtual servers have dedicated processing and storage, they tend to have high performance.  Power management can be managed so that if resource consumption for processing is low, this could be utilized in order to lower electricity costs.

Though virtual servers have dedicated processing power, this is still limited to the extent of the capacity of the physical server. This is also considered especially since there are various virtual servers that are stored in the same physical device. This may also affect scalability as an unexpected surge in traffic might overwhelm the number of server resources dedicated to your hosted program. Issues may arise as there are no existing methods to measure the performance of virtualized environments. Adding an extra layer of software via the hypervisor may be the closest in measuring performance, but this will be done at a higher processing cost which could also affect the quality of service for the existing physical device.

Security may become an issue. Though virtual servers have safeguards similar to dedicated servers, security risks from other virtual servers within the same physical device may affect your own as well in the assumption that they are not isolated from one another. Management of virtual environments may become tedious as a consequence of its customizability. Virtual servers will need to be constantly monitored, configured and saved though there are products available in the market to make these practices convenient.

Various virtualization methods exist right now, which creates different forms of virtual servers depending on the function of the application, the requirement of users, as well as other factors. They are usually marketed as IaaS in the existing marketplace. One type of virtual server focuses on operating systems where they are moved into a digital environment. The operating system operates like any other with the exemption that all of its processes do not rely on existing hardware to run. Because the operating system is virtualized, this also means that they can be portable and even be moved or transferred via USB.

Of course, traditional physical servers themselves can be transferred to virtual servers. So instead of just emulating one program, application, or operating system, an entire server is digitalized so that more virtual servers can be included in the physical device. It is also possible to transform traditional physical servers into cloud servers, though the differences between virtual vis-à-vis cloud will be discussed later on.

As an emulation tool, virtual servers can also mimic hardware akin to its original functions. This is essential particularly for legacy devices that are no longer supported by companies. A virtual server can mimic old PCs, gaming consoles, and other hardware separated from the actual physical device. Moreover, virtual servers emulating hardware are also used for testing and diagnosis to measure the performances and limits if said devices in the digital realm. 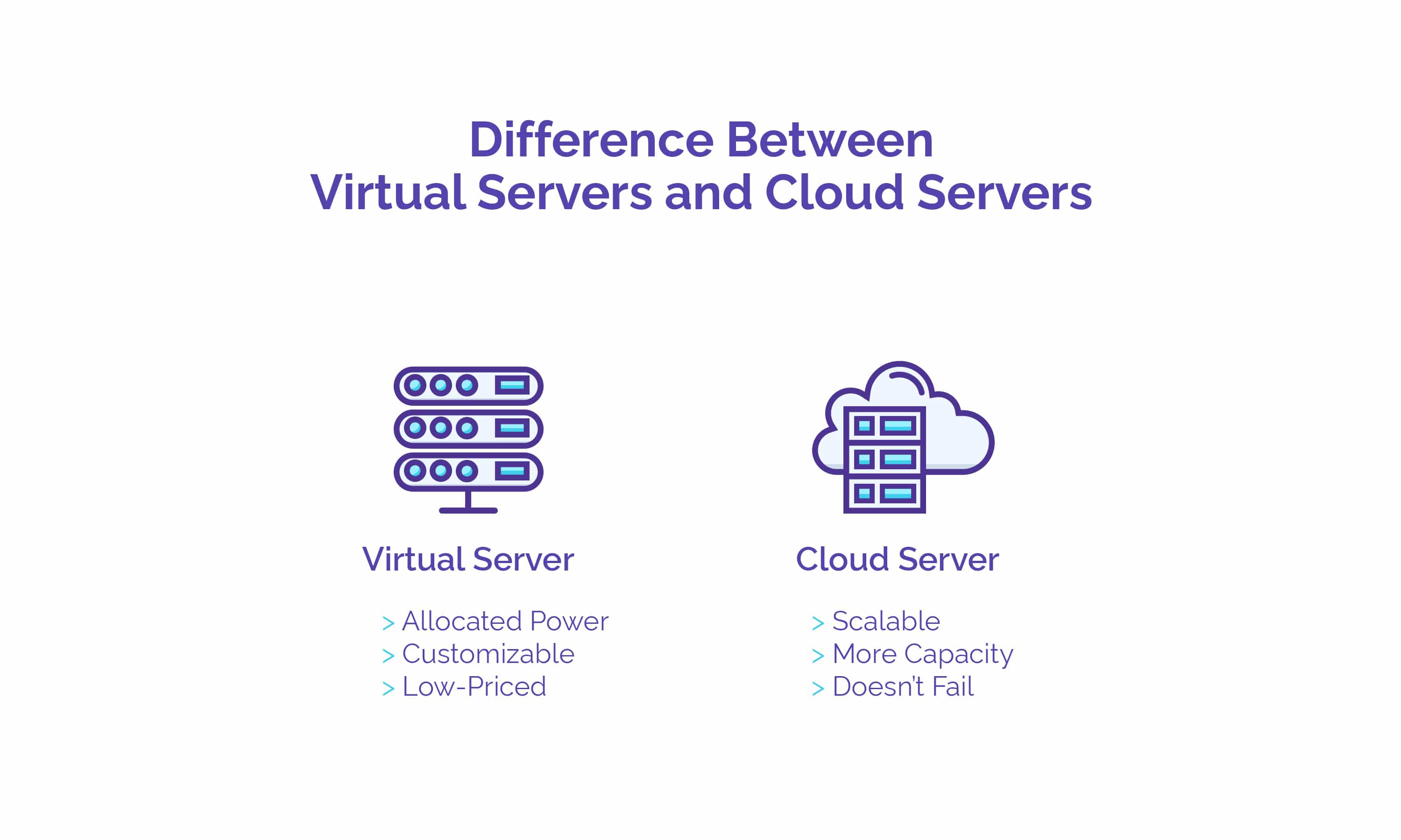 Security may be a concern for cloud servers. Though they are still high in terms of safeguards, their nature of being continuously connected on the internet means that they are more vulnerable to cyber-attacks compared to virtual servers. The advantage of cloud servers, however, is due to its decentralized nature, it has no single point of failure as compared to virtual servers.

Costing is cheaper for virtual servers mainly due to limited processing capacity. Cloud servers are also cheap compared to traditional servers; but because they are always connected to the web, the payment plans offered are usually on a pay-per-use system. Traffic spikes may increase cloud server costs unless managed otherwise.

With that being said, it is also possible for virtual servers to be converted into cloud servers and vice versa. It all depends on user preference and the function of the existing program, application, or website. Cloud servers may be preferable for applications such as social media that expect continuous growth but are not allowed to crash at least once. But if a user gives more premium on stability and customizability, virtual servers are the way to go.

Several virtual servers are available in the market right now at the pleasure of users and clients. These include Microsoft Virtual Server, Virtual Box, VMware Server, Microsoft Azure, and Amazon Elastic Compute. Microsoft Azure, for instance, offers both virtual server and cloud server products as part of their IaaS platforms. They are usually helpful for building, testing, and managing applications with effective scalability. Microsoft Azure is hosted on existing Microsoft data centers and offers both closed source and open source licenses. Virtual machines, app services, website hosting, storage, and even mobile services are just some of the available uses for Microsoft Azure.

Virtual Box is a hypervisor owned and operated by the Oracle Corporation. It is essentially a free and open source hypervisor and can be installed on a variety of operating systems including Linux and Windows. Virtual Box is a type of virtual server that’s focused more on hardware and operating system virtualization. This allows users to emulate various types of operating systems and hardware in powerful desktop computers and even laptops. Virtual Box can also emulate ethernet network adapters without the need to find and install respective drivers for user convenience.

Users often cite the appeal of virtual servers for a variety of reasons, including its existing redundancies, scalability, security, and emulation. Concerning redundancy, users can virtualize additional servers without the need for spending on extra cash to purchase new physical devices. This not only means additional revenue but also less interruption and downtime for services. For scalability, users can utilize virtual servers and consolidate them on a single physical device.

Moreover, they may customize dedicate processing power, existing virtual hardware, and processes. Security and safeguards may also be tweaked depending on user preference or program function. Of course, the opportunity of virtualizing legacy hardware can be useful for businesses that will make the transition to new hardware more convenient.

Virtual servers are part of a new trend of IaaS that is becoming more foundational in businesses. It is no secret that the largest tech companies such as Microsoft and Amazon are offering virtual servers as a core part of their business services. This makes virtual servers more integral with business demands, as with several clients relying on it to host websites or experiment with new programs.

Expert advice to help you get most of your servers. Sign up to get the latest news and tips delivered straight to your inbox.

Web hosting - YourLastHost
4.7
Based on 13 reviews

Satyajit Gohel
10:33 24 May 19
YourLastH... ost is a really good web hosting site. They have the best to offer, and the speed is amazing. All in all great service for a great price. Kudos to YLH.read more

Stuart Sanders
14:20 22 May 19
Received... an exemplary service from their technical support specialist, he worked out a solution within a few moments and helped to keep our website running perfect.read more

Shanna Nelson
13:56 16 May 19
Yourlasth... ost has shown some great knowledge about their site and know exactly what they are talking about. Makes me feel confortable about my website.read more

Constance McKenzie
14:34 06 May 19
We are... happy with this hosting provider generally. Their presence is transparent while their performance is outstanding. Tech Support is always on the ball, wait times are acceptable, and they're patient.read more

Hilary Griffin
14:28 12 Apr 19
Reliabili... ty has been excellent. 24/7 live support by knowledgeable people who are patient with my learning curve.read more

Simon Simonsen
14:28 17 Jan 19
Just want... to say that my money is well spent as I have used yourlasthost successfully and reliably at very modest rates. Using them I have my website online for 24 hours. All works with no glitches. By the way their technicians are helpful for me any time I contact them and they solve all my issues in no time. I appreciate everything they do for me.read more

Clara Souza
13:24 08 Oct 18
So the... price you see is rarely the price you get in the web hosting world. This hosting provider is reliable and well priced. It's good enough for me to be with them.read more
See All Reviews 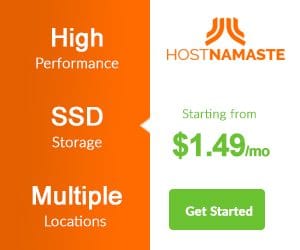